Every day the AFM helps thousands of musicians — negotiating fair agreements, protecting ownership of recorded music, securing benefits such as health care and pension, or lobbying our legislators. The AFM is committed to raising industry standards and placing the professional musician in the foreground of the cultural landscape.

Organized in 1901, the Atlanta Federation of Musicians is a significant chapter of the AFM representing around 700 musicians throughout Georgia, including the metropolitan areas of Atlanta, Athens, Augusta, Columbus and Macon. Our professional members perform every imaginable style of music – including blues, classical, country, ethnic/world music, hip-hop, jazz, rap, rock, soul. 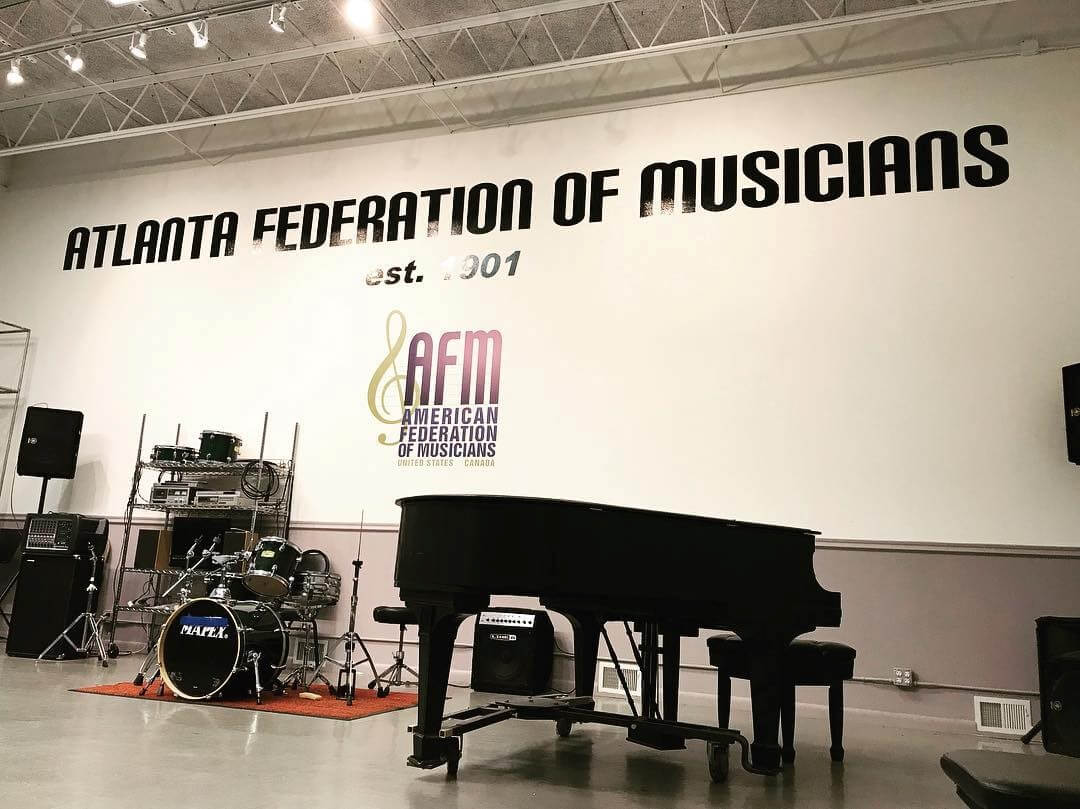 BRUCE KENNEY joined the Atlanta Federation of Musicians in 1985, and has served as President since 2015. He first joined the AFM Houston local in 1975, working as a bass guitarist. Shifting to orchestral work as a French horn player, he eventually joined the Atlanta Symphony.

His freelance years depended on per service income in pop and classical performance. Working freelancers in all genres stand to benefit greatly from collaborative thinking, and the AFM provides the needed structure. For specific workplaces, AFM collective bargaining agreements further solidify terms of employment.

His goal as President is to get the right conversations in progress so that musicians can decide how best to deal with the concerns of their professional lives. He encourages the Board to examine, with an open mind, ways to identify and inspire these voices.

MICHAEL MOORE was raised in Decatur, GA., himself the son of long-time AFM member Bill Moore, and has been a working member of Local 148-462 since 1965 at the age of 15, when he worked a steady cocktail hour job on bass and guitar at the Hyatt Regency. He has been Principal Tuba in the Atlanta Symphony Orchestra since 1968 and has been on the executive board of the Local since 1982. He also serves on the Local’s Finance Committee and is Treasurer of both the International Conference of Symphony and Opera Orchestras (ICSOM) and the Atlanta Symphony Orchestra Players’ Association (ASOPA). He is President and founder of the Atlanta Brass Society,Inc.and is tubaist with the Atlanta Symphony Brass Quintet. Michael’s background in both classical and popular music has contributed to his understanding of the music industry and his willingness to serve the Local for nearly his lifetime.

Brian stepped into the role of Secretary-Treasurer after four years of working at the Local, starting as Office Manager before moving into an operational role in 2020. A former trombone player, he has played in various honor bands around the country and marched in the Auburn University Marching Band. After school, he spent eight years in journalism and digital marketing, gaining a multitude of experiences that brought him to the Local. With an eye for potential, he is dedicated to organizing and growing the ranks of Local 148-462 to foster a healthy, sustainable, and active music community for professional musicians across our jurisdiction.

Guitarist BILL HATCHER is an Atlanta-based musician who’s been performing in Atlanta since 1974. He’s performed with the Atlanta Symphony, Atlanta Opera, Atlanta Ballet, Alliance Theater and numerous others. As a studio musician, Hatcher has performed on more than 3,000 local recording sessions. He is a life member in local 148-462 and has served as an executive board member for many years.

ERIC FERGUSON is an AFM life member and previously a member of Actor’s Equity Association. As Bassist for Ronnie Hawkins’ band in the early 1970’s, Eric performed in Toronto and London Ontario, as well as on Kenny Rogers’ variety show ROLLIN’ ON THE RIVER. His sideman credits also include recording artists John David Souther, Martha Reeves and the Vandellas, Lonnie Mack, Sir Douglas Quintet, The Shirelles, King Biscuit Boy, and Kinky Friedman. At the Chautauqua Institution, Eric was a featured vocalist and backed up an array of Grand Ole Opry members in Minnie Pearl’s country revue. In professional theatre, he has played bass in THE ROBBER BRIDEGROOM, BIG RIVER, LITTLE SHOP OF HORRORS, BEST LITTLE WHOREHOUSE IN TEXAS, A FUNNY YHING HAPPENED ON THE WAY TO THE FORUM, DELLA’S DINER 6, SHREW THE MUSICAL, TWELFTH NIGHT THE MUSICAL and others. Eric was bassist/conductor for BEEHIVE starring Mary Wilson, and bassist/music director for numerous productions of PUMP BOYS AND DINETTES. He most recently performed with America’s Got Talent 1st prize winner Michael Grimm at the Hard Rock Casino Hotel in Atlantic City. Previous to AFM Local 148-462, he was a member of locals 92 and 802. Eric was Director of Public Relations at 148-462, and ran the in-house signatory booking agency. He subsequently served on the LEB up to the present time. The most important element in all of these events is a deep sense of gratitude to have performed with so many great musicians, and to be part of the AFM.

The American Federation of Musicians has been an important part of MARY KENNEY's life since she first joined in 1978. She is a free lance cellist and member of both the Opera and Ballet Orchestras, joining the Union Board in 1998.She has actively participated in orchestra players committees, ROPA, CBA negotiations, modernizing our building and most recently, efforts of the Solidarity Team and Organizing Task Force. Through it all - management lockouts, picket lines, CBA negotiations, long fought for gains in pay and working conditions and some amazing performance opportunities, she has remained committed to our shared objectives.

KEVIN LEAHY is a freelance drummer and percussionist who has worked in a variety of settings. A graduate of the Indiana University Jacobs School of Music, he is currently the Executive Director of the Atlanta Pops Orchestra and has served on the Board of the Atlanta Chapter of the Recording Academy.

JOHN MCCUTCHEON is a nearly-50-year veteran of the US folk music scene. A songwriter, composer, multi-instrumentalist, author, actor, an international touring artist, and long-time labor activist. His is a recording artist with over 40 albums to his credit, including 6 Grammy award nominations. His song “Christmas in the Trenches was named “one of the 100 essential folksongs” by Folk Alley. He is a much-in demand workshop leader and is considered one of the world masters of the hammer dulcimer. He has an extensive collection of field recordings from around the world in the Archive of American Folksong in the American Folklife Center in the Library of Congress.

McCutcheon was one of the co-founders of AFM Local 1000 and served as its president for fifteen years. He is a 2-term Local Executive Board member of 148-462 and serves on its Organizing Task Force, Fair Trade Music Committee and Solidarity Team.

He is a resident of Smoke Rise, GA where he lives with his wife, author Carmen Agra Deedy and is the doting grandfather of five.

AVERIL TAYLOR is an active Atlanta musician who also studied music in the city. He is a former student of John Head and James Patterson. He studied music in undergrad at Clark Atlanta University and in grad school at Georgia State University. Averil maintains an active performance schedule while also being involved with the Atlanta Music Project. He believes strongly in the potential that music has in the area of youth development. Averil works to help the underserved have access to high quality musical instruction. Averil hopes to play an active role on the board to help with the work of advancing musician’s rights and leaving a positive footprint on the Atlanta music scene.

MEGHAN YOST-COE, violist and pedagogue, strongly believes in music as a vehicle for human expression and social change. She teaches and performs with organizations across the country that provide low cost or tuition free training for young musicians. Her commitment to accessibility has led her to work with El- Sistema inspired programs such as Atlanta Music Project, Porterville Strings, and Carnegie Hall’s PlayUSA. She regularly travels to give masterclasses and workshops throughout the U.S. and last year was invited as Guest Artist to Sunway University in Kuala Lumpur, Malaysia to give masterclasses and concerts. Ms. Yost-Coe is also the Viola Professor at Clayton State University. In 2020 she was named Music Educator of the Year by the Atlanta Federation of Musicians.

An active chamber musician, Ms. Yost-Coe has collaborated with Harlem Quartet, Dali Quartet, Elmar Oliveira, Petar Jankovic, Bright Feather Ensemble, and Kaleidoscope Chamber Orchestra. Her love of chamber music blossomed under the guidance of her mentors Joel Krosnick, David Cole, Chauncey Patterson, Doris Lederer, and Kathy Murdock. She regularly performs at The Porterville Strings Festival and the Atlanta Music Project Summer Chamber Series. Past festival performances include Kneisel Hall Chamber Music School, the Dali Quartet International Music Festival, and the Garth Newel Music Center. Love of chamber music also led her to collaborate with the indie-folk rock band River City Extension, touring the continental U.S. for two years. Her live session recordings can be heard on Audiotree, Little Elephant Room, and Daytrotter. Yost-Coe performs with orchestras across the southeast, including the Atlanta Opera, Charleston Symphony Orchestra, and Columbus Symphony Orchestra. She has performed throughout the U.S., Canada, China, Malaysia, and Brazil. Yost-Coe received her Bachelor of Music from Indiana University Jacobs School of Music, where she studied with Yuval Gotlibovich and Alan deVeritch; and her Master of Music from Lynn Conservatory of Music under Ralph Fielding.